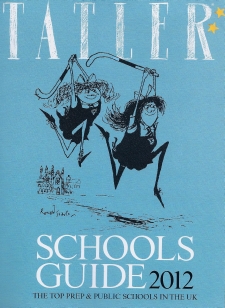 It's never too early to learn the power of retail therapy: Moreton Enterprises' mini-moguls run an in-school shopping village, flogging everything from cappuccinos to school-branded pyjamas, and they're now selling local lamb and Welsh Black beef online too. With a turnover of £35,000-plus, it's only a matter of time before they pop up on Dragons' Den, and it's not bad for the old UCAS form either.

Moreton is firmly non-selective but puts a great emphasis on getting girls to perform above expectations: in a recent survey of more than 300 independent schools, it came top for value added. They make a big thing of ‘academic enrichment' here - lots of visiting speakers, culture with a capital C and a resident lecturer who helps girls prepare for university interviews. On the sporting front, lacrosse gets top billing (15th out of 56 schools in the national rankings), but the hockey team has had its best-ever set of results, and there are exciting equestrian developments, with the new arena polo team coming second in the Schools and Universities Polo Association Intermediate Girls' Tournament. Flexi-boarding keeps everyone happy and sixth formers live in two palatial boarding houses with ensuite bathrooms. ‘It's a luxury going back to school,' says one. Ebullient, much-loved principal Jonathan Forster notches up 20 years in charge in 2012 - happy anniversary, Sir - and Moreton is gearing up for its centenary celebrations in 2013.